In 1953, when the establishment of a new Lodge in Bath was proposed, Freemasonry was in the ascendancy.   Just eight years after the end of the second world war, many men still sought the comradeship fostered by war, and most Masonic Lodges throughout the country had significant waiting lists for admission, including St Luke’s Lodge in Bath – itself only consecrated six years earlier.

At their reference committee meeting on 20th January 1953, it was proposed that the Lodge be asked to support the application for a new Lodge as a daughter Lodge of St Lukes; when put before the full Lodge meeting in April 1953, this proposal from W.Bro. Robertson and seconded by W.Bro. Pugsley was carried unanimously.    Both proposer and seconder became founder members of the new Lodge, along with other St Lukes members.   With the impending Coronation of Queen Elizabeth II just a couple of months ahead, in June 1953, it was decided that the new Lodge should be named Elizabethan Lodge.  To cement the association with that monarchical name, the image chosen for the Lodge Crest was that of The Golden Hind which, during the reign of Queen Elizabeth I, became the first ship to circumnavigate the world.

In 1953, there was a great deal of anticipation surrounding the ascension of the new monarch being the harbinger of a new era that might even come to emulate that of her eminent namesake some 400 years earlier.  The founders, swept along by this euphoria led by the media of the day, decided on a Lodge motto referring to ‘A Golden Age’, and someone – nobody knows who – came up with the latin phrase “Epocarus Doratum”.   However, whoever it was that had this particular inspiration, they were no latin scholar, the basis of the phrase being closer to ancient Greek than Latin, although closer is the operative word here as it has no perfect match in either.  Nevertheless, the lodge remains particularly proud of this very unique motto.

The necessary formalities surrounding the creation of a new Lodge were conducted over the following months, and the date for the consecration ceremony was set for Saturday 14th November 1953.   That ceremony was conducted by the Provincial Grand Master for Somerset, R.W.Bro. Brig. Gen. Norman, who installed the Founding Master W.Bro. Arthur Prince, a retired shopkeeper and member of St Alphege Lodge.    He was 78 years of age, and continued as an active member of the Lodge until his death ten years later.

There were 167 Brethren present at the consecration meeting, including the 22 founding members and 10 original joining members of the Lodge, meaning it began its life with a healthy membership.  In fact, the size of the attendance required the erection of three rows of temporary seating on staging around the Temple.   The Orchard Street dining room being unable to accommodate such numbers, the Festive Board was held at Fortt’s Restaurant in Milsom Street.

At the consecration meeting, three new candidates were proposed, one of whom, Fred Sampson, became the first initiate of the Lodge at the first regular meeting; he remained a member of the Lodge for 35 years.    In the years following years a steady stream of new members were admitted until the membership reached more than sixty during the early 1960s.   It was then decided to limit the introduction of initiates to two per year, and from that point the membership numbers stabilised.

By tradition the Lodge works Nigerian Ritual, the same as its Mother Lodge, but as is normal with most Lodges, the Lodge has developed its own little idiosyncracies within the overall framework of the ceremonies.  There have been a small number of occasions when multiple ceremonies have been conducted, including once in 1982 when both a first and a second degree ceremony were conducted on the same evening – that must have been a long night!   However, because of the social nature of Elizabethan’s own traditions, the Lodge tends to conduct just one ceremony for one candidate per meeting, meaning that the membership can concentrate on making each ceremony as memorable an evening as possible for the candidate.

This also extends to the Festive Board and, over the years, Elizabethan’s reputation for the hospitality and enjoyment experienced by its visitors has spread far and wide – many returning regularly.  Despite Lodge membership having reduced by around a third from the halcyon days of the 1960s, the dining room is still often full on Lodge nights with, on occasion, guests actually outnumbering their hosts.   The December meeting is traditionally a white table event where, after a short formal meeting, the Brethren are joined by their partners and friends for a truly festive evening of fun and entertainment.

The Lodge is not afraid of indulging in innovations, one of which occurred in 2015 when the Christmas Festive Board took place in the Temple itself, the Brethren holding their short business meeting beforehand in the part of the Museum that is configured as an early Lodge Room.   This can also extend to the occasional surprise such as when a new Master, a keen musical-enthusiast, found at his installation that the Master’s song was not sung to him by the Brethren, as usual, but instead played to him on an electric guitar in every rock style imaginable from Led Zeppelin to Guns n’Roses! 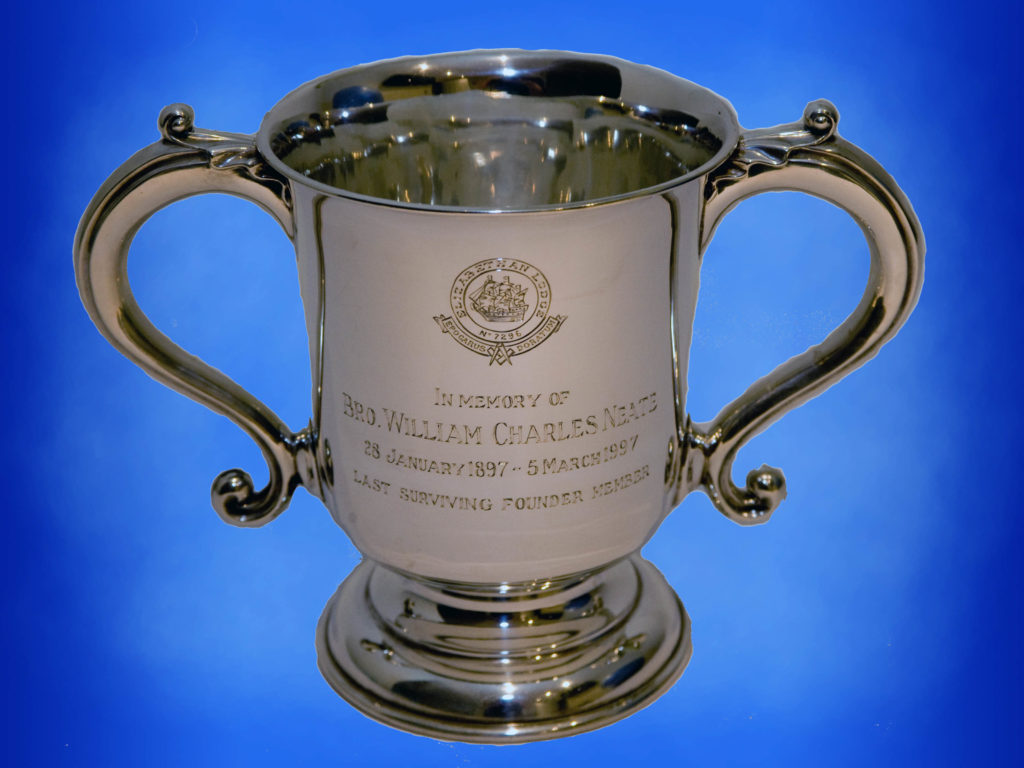 The Lodge has had a number of members distinguished by their longevity of membership of the Fraternity.  Several have received fifty-year certificates over the years, including W.Bro Harold Chapman in 1974, Bro. Harold Jones in 1976 and W.Bro Granville Mason in 2012.   Harold Chapman was a Founder Member and was Master of the Lodge in 1957. Granville’s presentation was particularly satisfying for the Brethren, as he had started his Masonic career by being initiated into the Lodge in 1964, and then embarked on a career in the Civil Service that saw him join several other Lodges as he moved around postings in the UK and overseas before he rejoined the Lodge after retiring to Bath.

Two members received sixty-year certificates – W.Bro Bill Chalkien in 2003 and W,Bro Eric Naylor in 2011.  Both were stalwart members of the Lodge, Bill serving as Master in 1978.  He was initiated into Sphinx Lodge in Ceylon in 1943.   Eric joined the Lodge just months after it was formed.   He was Master of the Lodge twice, in 1962 and again in 2000, one of only six members to hold that particular distinction. 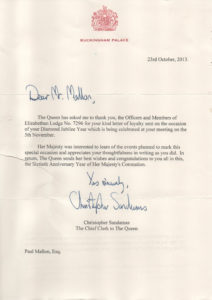 But the longest serving member was Bro. Bill Neate, who received a seventy-year certificate in 1993.  He was also a Founder Member, having been initiated into St Clair Lodge in 1923.   Due to ill-health at the time, he was unable to attend the Lodge for the presentation, so the Master and the Assistant Provincial Grand Master, together with a number of members, visited him at home and presented the certificate to him there.  He died in 1997 at the age of 100 and left a substantial legacy to the Lodge to be used for Masonic purposes.  The Brethren decided to use some of this legacy to purchase a Loving Cup dedicated to Bill and to be used on Installation nights.   Interest from the rest has been used to purchase Past Masters’ Jewels presented to each outgoing Master, as well as contributions to installing a lift in Bath Masonic Hall in 2013 and restoration of the Master’s Chair in 2016.

With the Lodge foundation being so closely tied with the Coronation year, the Lodge has celebrated its various anniversaries in the same year as the major Jubilees of Queen Elizabeth II.   On the occasion of it’s own Diamond Jubilee, the Lodge received a letter from Her Majesty congratulating the Officers and Brethren on this achievement, which was read out at the anniversary meeting on 5th November 2013.  The Lodge has since held its 400th meeting, in 2015, and looks forward to continued progress towards whatever future milestones it may achieve.