There are not too many organisations that have existed for 150 years in the same building but, on 3rd December 2016, that is exactly what the Freemasons of Bath celebrated – the 150th Anniversary of Bath Masonic Hall. They were joined for this unique event by their Guests of Honour the Mayor and Mayoress of Bath, Cllr Paul Crossley and Mrs Margaret Crossley.

The Bath Masonic Hall is in Old Orchard Street, and was originally built in 1750 as a Theatre which, in 1768, became the first provincial Theatre Royal in the country, and the first home of the Bath Theatre Royal Company. The theatre moved to Beauford Square in 1805 and, in 1809, the building was converted to a Catholic Chapel. When the congregation moved to their new church, St Johns, in 1863 the building was again empty until acquired by the Bath Freemasons in 1865. It was again converted, this time for use as a Masonic Hall, and dedicated on 3rd December 1866 150 years previously, virtually to the hour, of these celebrations.

Old Orchard Street is actually the third Masonic Hall in Bath. The first was in York Street and was opened in 1819 with great splendour, but was only in use for five years. That building still exists and is now the Friends Meeting House. The second was in the Corridor and was provided for them by the architect of that shopping arcade, Edmund Goodridge. It opened in 1834, and was in use up to the move to Old Orchard Street in 1866, but no longer exists due to internal redevelopments over the intervening years.

However, Freemasonry in Bath goes much further back than 1819, almost all the way back to the creation of the first, or Premiere, Grand Lodge of England in 1717, an organisation that will celebrate its own tercentenary next year. The first Lodge to meet in Bath was formed just seven years later, in 1724 at the Queens Head pub in Cheap Street. It was the 28th Lodge to join Grand Lodge, and was the first to be formed outside of London.

That Lodge only met for around ten years, disappearing in the mid 1730s but in the meantime another had formed in 1732 next door at the Bear Inn. That Lodge, originally called The Bear & Collar Lodge, still meets in Old Orchard Street to this day as the Royal Cumberland Lodge No.41, having been renamed in 1786, and is the oldest Lodge in Somerset. The Provincial Grand Lodge of Somerset was also founded in Bath, in 1768.

By 1866, there were two other Lodges in Bath who combined with Royal Cumberland Lodge to purchase the building in Old Orchard Street – Royal Sussex Lodge No.53 and Lodge of Honour No.379. All three Lodges still meet there to this day, and during those 150 years have been joined by four more – Royal Albert Edward Lodge No. 906, St Alphege Lodge No.4095, St Lukes Lodge No. 6540 and Elizabethan Lodge No. 7296.

The guests for the evening were welcomed in a somewhat unique manner by the current Masters of all seven Bath Lodges, after which a history of those 150 years was presented by the building’s historian. Following a sumptuous supper, the members and guests danced the rest of the night away until midnight.

The event was also marked by the return of the Masters’ Chair, which had been away for some nine months undergoing restoration. It is a replica of the original 1784 Chair that graced the first Masonic Hall in York Street, and was presented to the Hall in 1930 by the then Provincial Senior Grand Warden. This Chair has given sterling service accommodating more than 500 Lodge Masters over the intervening 85 years, as well as  surviving the Bath Blitz during which the building was seriously damaged. Thanks to the efforts of the Brethren in the years following the end of the war, the Masonic Hall was refurbished and is now one of Bath’s many historic attractions. 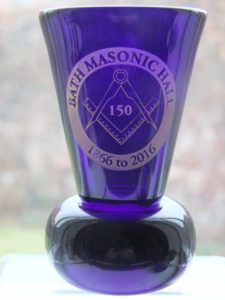 To further mark the anniversary, the Bath Masonic Hall Trust has commissioned Bristol Blue Glass to produce a unique commemorative glass, of which only 150 will be made, one for each year of the anniversary. Known in Masonic circles as a Firing Glass, this type of glass has been used since the 18th Century at Masonic dinners to drink a toast the sovereign and other dignatories.  The glasses cost £49.95 each, and come in a presentation box  with individual numbered certificate; an order form can be downloaded here.